Aisha Ahmed is one of the emerging actresses and voice artists in the Indian Film Industry. She is much admired and appreciated for her portrayal of Amreen Mirza in the short romantic film, ‘Chhaju Ke Dahi Bhalle’. To date, she has appeared in fantastic roles. Though her roles were small, she was able to garner the attention of the audience through her outstanding execution of several roles. Moreover, she is a social media sensation. Aisha Ahmed is popular with her reels on her Instagram profile. 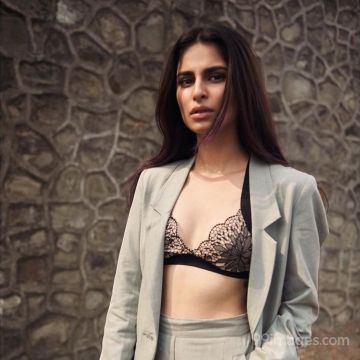 The actress was born on 8th May 1996 in Mumbai, Maharashtra, India. She is the loveliest daughter of Asad Ahmed and Rukhsar Rehman (renowned actress). Aisha hasn’t disclosed the identities of her siblings. A source revealed that Rukhsar divorced Aisha’s father and married her alleged boyfriend, ‘Faruk Kabir’ (filmmaker). Since her childhood, Aisha decided to pursue her career in the Indian Film Industry. Her mother helped her for the same from a very young age.

The concerned actress is 24 years old. She has an Indian nationality. Her ethnicity is Islamic. She was born under the horoscope belt of Taurus.

Aisha Ahmed completed her elementary graduation from Barnes School and Junior College, Deolali. She enrolled herself in Mithibai College, Mumbai. The actress hasn’t revealed anything about her subject matter in bachelor. She might have taken up a general degree or professional course. After completion, she started focusing on her modeling and acting career.

In 2016, Aisha Ahmed started her career as a casting assistant in the short movie ‘Rubaroo’. That same year, she appeared in an episode of ‘Shockers’. In the initial period of her career, she bagged the role of Sharanpreet in the romantic drama movie ‘Tum Bin 2’. The movie was really good and even did well in the collection. Moreover, she was able to garner attention in the early stages of her career.

In 2018, Aisha procured the character of Malini Mathur in the drama film, ‘3 Storeys’. The storyline is based on the people living in the 3 storey Chawl in Mayanagar. The next year, she made her appearance as Esha in the drama movie, ‘Raid’. She even appeared in the mini-series, ‘Adulting’.

In 2020, Ahmed portrayed the role of Amreen Mirza in the short romantic film, ‘Chhaju Ke Dahi Bhalle’. Aisha appeared in the role of Aisha in the dramatic short film, ‘Medium’.

The actress is a newcomer to the industry. To date, she has appeared in several movies. She even works as a model and models for renowned brands. Aisha gathers all her earnings from her professional projects. Moreover, she advertises and endorses many brands. And the concerned brands must be paying her a lot. The actress must be charging for posting pictures and reels on her Instagram profile. Her net asset is 7 lakhs.

To date, there is no revelation about her dating life or her dating history. But a source disclosed that she is allegedly dating Rohit Suresh Saraf. He is a handsome and dashing actor in the Indian Film Industry. The latter stated that they are just close friends and nothing else is brewing between them. The alleged couple shared a picture of their vacation on their respective social handles. Let’s see when the concerned couple will make it official.

Aisha Ahmed has a lean physique with a fair complexed body. She has a decent stature of 5 feet 3 inches. Her body weight is around 45 kg. She has beautiful long brown hair. Another characteristic that makes her look beautiful is her brown eyes. Her measurements are 28-26-28 inches.

The actress is very engaged in her social handles. Moreover, she has a decent number of followers. Her Instagram profile has 732k adherents. She has a Twitter profile with 1k followers. The actress has an inactive YouTube channel with 28k subscribers.

Who is Aisha Ahmed?

What is the birth date of Aisha Ahmed?

Is Aisha Ahmed in a relationship?